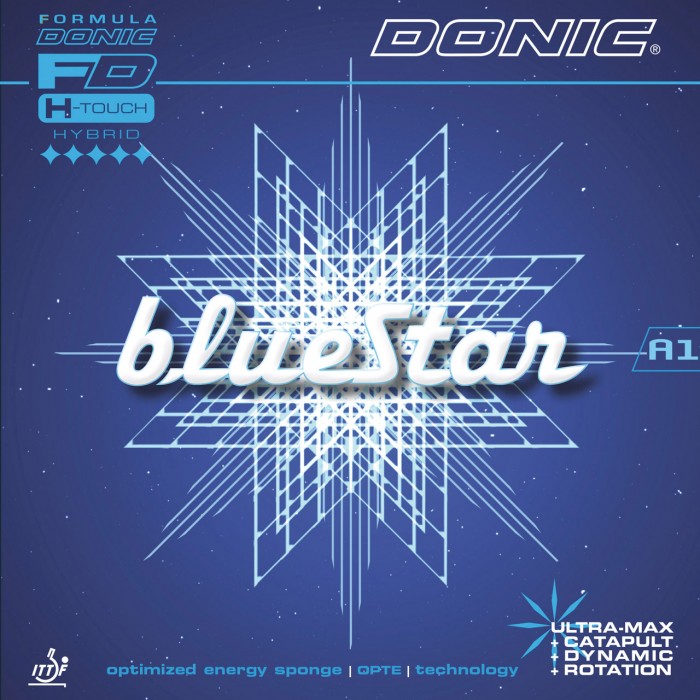 The name says it all. The BLUESTAR has the best prerequisites to become the new star among the DONIC table tennis rubbers, because here comes something really new. The secret of the BLUESTAR lies in its sponge, which has a completely different composition than the sponges of all other DONIC rubbers. "Optimized Energy Sponge" is what the developers have proudly called the underlying technology, OPTE for short. A small-pored sponge, which sets new standards in terms of elasticity and dampening level due to its special composition, and you can feel this immediately when playing: fantastic catapult and speed properties make the DONIC BLUESTAR A1 an absolute top product. Of course, the upper rubber also contributes to this. Unlike the successful rubbers of DONIC's BLUEGRIP C-Touch series, the top rubber is only slightly sticky and extremely grippy. Former world champion Jörgen Persson is enthusiastic about this new development. "I have never played a better table tennis surface," declared the Swedish legend. With 52.5 degrees, the sponge of the DONIC BLUESTAR A1 seems relatively hard only at first impression. In the hands of players of an appealing level, however, it quickly becomes a strong trump card. Even ambitious players who are not active in the top classes can enjoy the BLUESTAR, but it is especially recommended for players who also train intensively.
Technology: OPTE sponge technology, extremely catapult-strong,
dynamic and fine-pored 52.5° sponge
Character: Ultramax speed and spin properties, guarantees precise attacking strokes
Recommendation: For ambitious, uncompromising attacking players

20 other products in the same category: